A Day Trip to Astoria

Nor does the memory of watching the riverside town of Astoria in The Goonies. This is where Tim first heard of Astoria, instantly knowing he wanted to explore the area. Victorian-style homes are beautifully nestled in the hillside alongside the Columbia River. The river leads to the Pacific. Large ships use the mouth of the river as a port of entry, just as they have for over a century. This town is filled with history and quaint charm.

We have now visited Astoria together a few times, each time being gifted with blue skies. Although Astoria is known for getting twice the amount of rain as Portland, we think of Astoria with memories of sunshine and a light breeze. We love the views Astoria holds, especially since views are available no matter where you go. Our day trip to Astoria has some of the best views of the city, paired with history and a good beer. 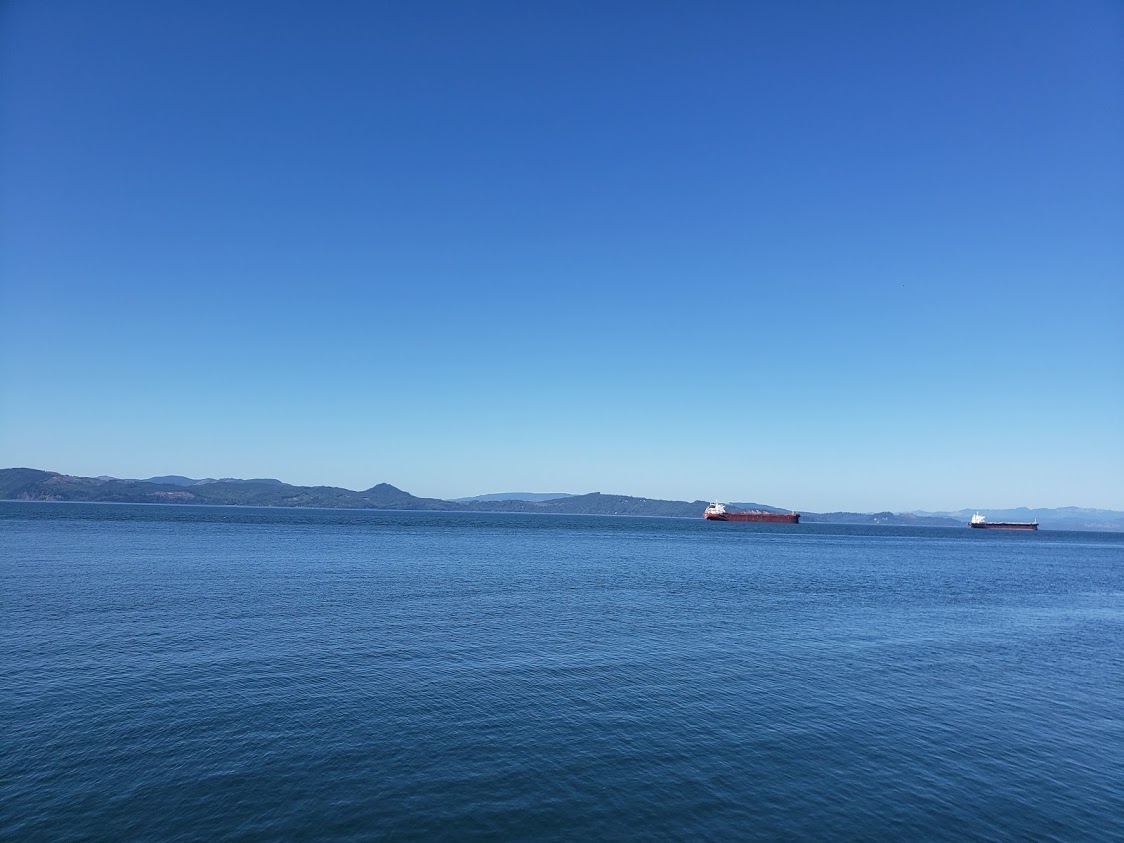 The Astoria Column was recommended to us by my uncle and I’m so glad he suggested we pay it a visit. The Astoria Column stands tall and proud in the middle of a park, scattered among park benches to enjoy the views. The 125-feet column, built in 1926, is covered in storytelling artwork. The artwork acknowledges the end of the Lewis and Clark Trail, which ended where Astoria now is. Other historical figures important to Astoria are also depicted in the muraled column. Tim and I walked around the park, circling the column, before taking in the artwork. We then headed inside the column and began the climb to the top.

There are 164 steps within the column before reaching the observation deck. Lucky for me, there are platforms to stop at along the way to gain your balance, although I think they’re meant for people getting past one another as coming up and down the column. Once at the top, the deck has breathtaking views overlooking the Columbia River, where it meets the Pacific, the surrounding areas, and endless miles of pines. The wind feels different up there, it feels freer. 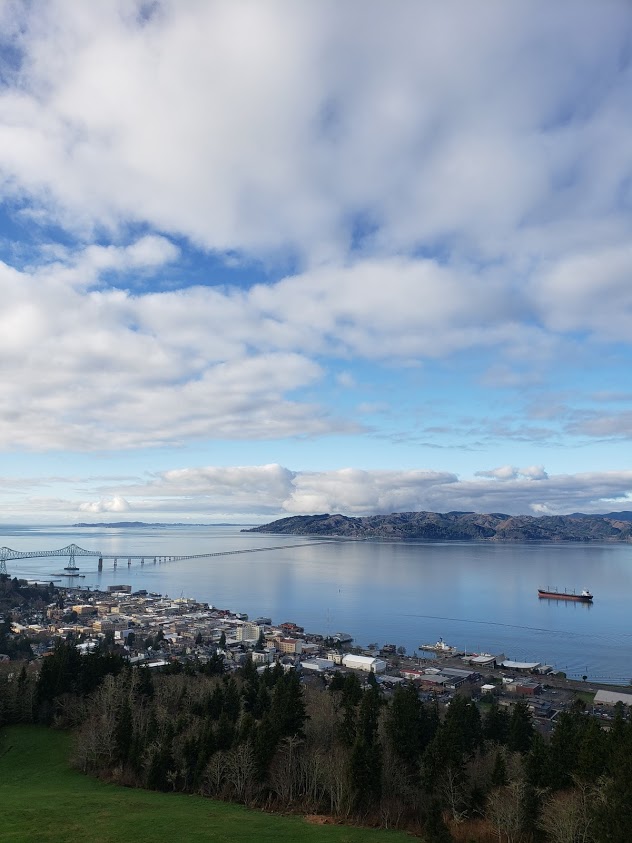 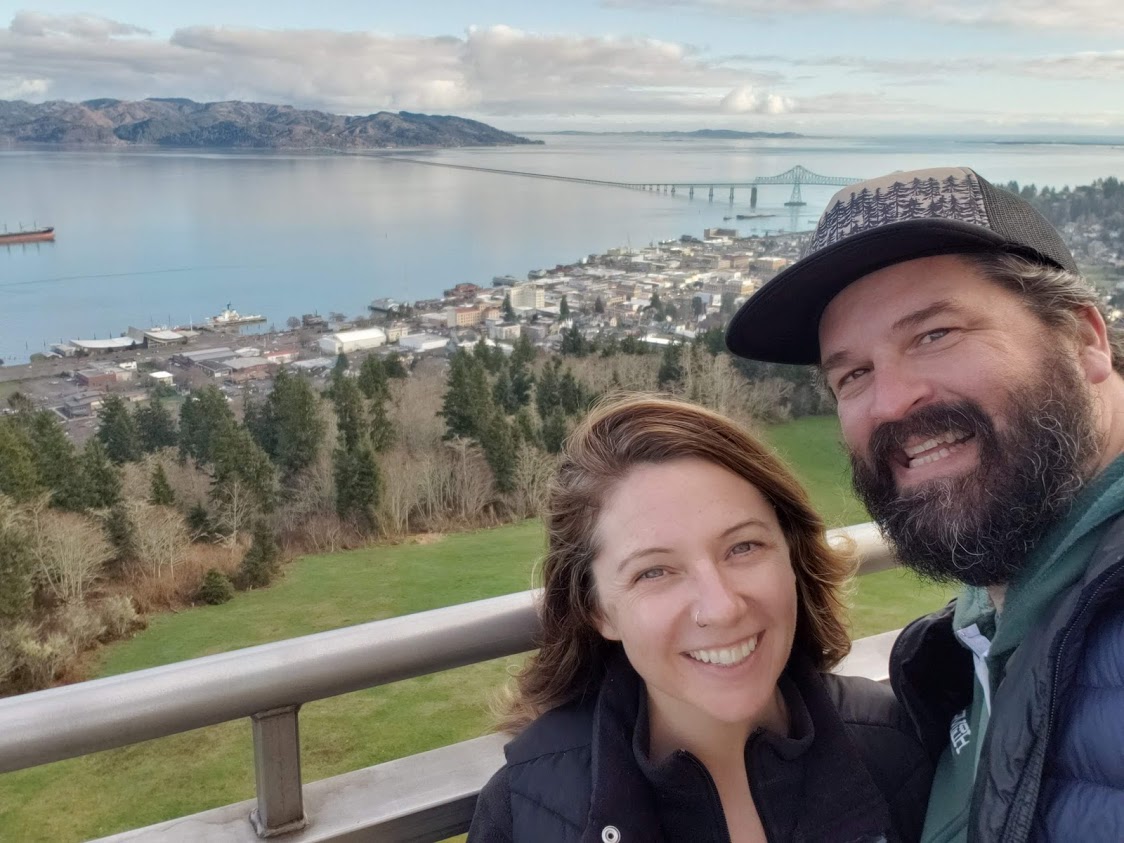 Even though Astoria is a fairly small town in comparison, there are a lot of options when it comes to breweries. And for good measure, we’ve made sure to try many of them over the last few visits. Our two favorites in town are Rogue Pier 39 Public House and Fort George.

Rogue is such a cool spot. First of all, you have to drive onto one of the piers to even get to it. Your car bounces as you drive over the old wooden slats of the pier. You can hear the seals barking from under the pier and on the jetty nearby. And it’s in the old Bumble Bee Tuna Cannery. There’s history within the hallways of the old cannery, bringing more of Astoria’s history to life. This alone makes Rogue worth checking out. But then you have their beer and you know you made the right choice. The beer is delicious and creative. When we were there the first time, they had just released a pina colada hazy IPA which tasted like summer in a glass. There are several brews on tap specific to the Pier 39 location, with creativity leading the way in their brewing. They also distill their own whiskey and gin, which we enjoyed tasting.

Fort George is our favorite beer in Astoria. It’s simply delicious. One time we were there they had a large selection of IPAs, all ranging in different flavors but all delicious. February is stout month at Fort George. Although we don’t normally drink stouts, we tried a few and truly enjoyed them. They have a nutty smokey stout that would be perfection around a campfire. The building itself is interesting too, with multiple layers each serving up a different food menu. We like the upstairs fire oven menu the best with its specialty pizzas and roasted mushrooms. Plus the upstairs has beautiful views of the river. 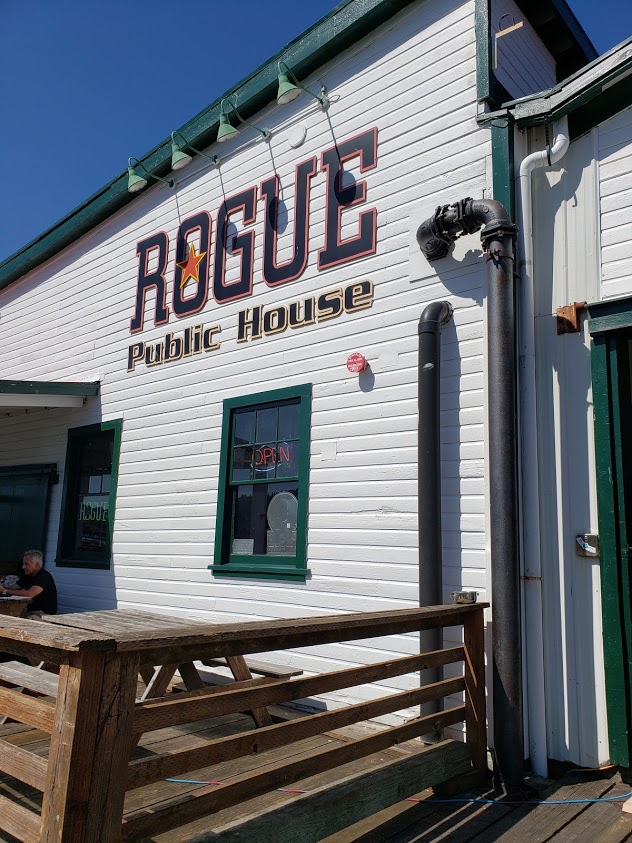 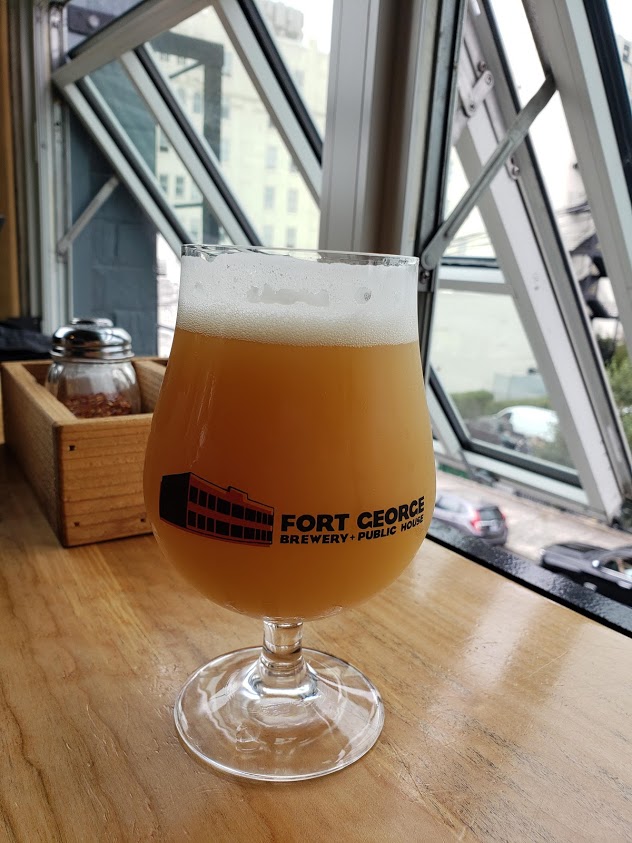 Fort Stevens State Park is just outside of Astoria on the coast of the Pacific. We discovered it when we were looking for places to camp nearby and are so glad we found this spot. The campground itself is lush and filled with trees. The park is also filled with diversity, packed with history, and crawling with wildlife! We even saw two younger elk bucks fighting one another, simply on the side of the road. We pulled over across the way, giving them lots of space, and watched them slam against one another as they fought for territory or a doe. Neither of us had seen this before, so we watched in awe as we took in the moment.

Due to Fort Stevens being on the Pacific Ocean, there are several areas to head out to the beach. There are miles of sand to watch the waves crash on the shore. In February, it was almost as if we had the beach to ourselves as the sun began to set. Alongside the shore also lies a shipwreck that’s been there for over a hundred years. The wreckage took place due to the harsh mouth of the Columbia River, where it enters the Pacific Ocean. Many ships have wrecked here, especially during the strong Pacific Northwest storms. The shipwreck is one of the most accessible shipwrecks, just steps away from a parking area. I highly recommend checking this out, but please be respectful of this piece of history. 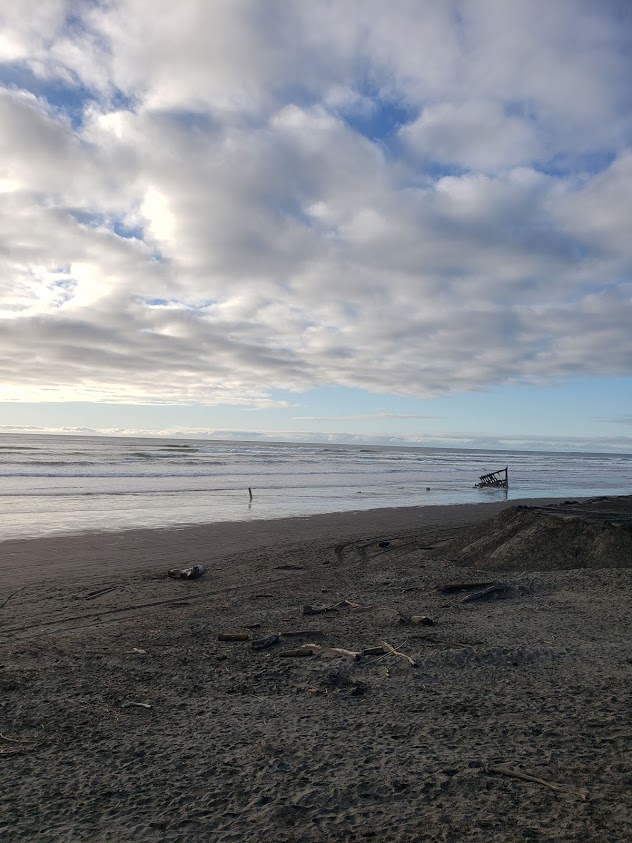 Another historic landmark within the park is Battery Russell. Battery Russell is an old military gun battery used by the Army from 1904-1944. The battery took a surprise attack in 1942 by a Japanese Navy submarine but did not destroy or damage it. This attack signified the first mainland military attack by foreign powers in World War II. Today visitors of the park can explore Battery Russell and feel a part of the history that took place there.

We explored the battery during the early morning fog with no one else around. It was eerily peaceful. The walls of the battery are covered in what you would expect in Oregon, green moss. It feels as if you’re stepping into a piece of history that’s been forgotten. We walked through the entire battery, making sure to go inside all of the dark rooms, looking around each corner, and climbing the stairs. We talked about what we thought each room was used for and what it looked like back in its time of use. We talked about the guns used and the sound they must have projected for miles due to their size. Once at the highest point of the batter, we took a moment and paused. The history of this place felt powerful, a heaviness waiting to be felt. 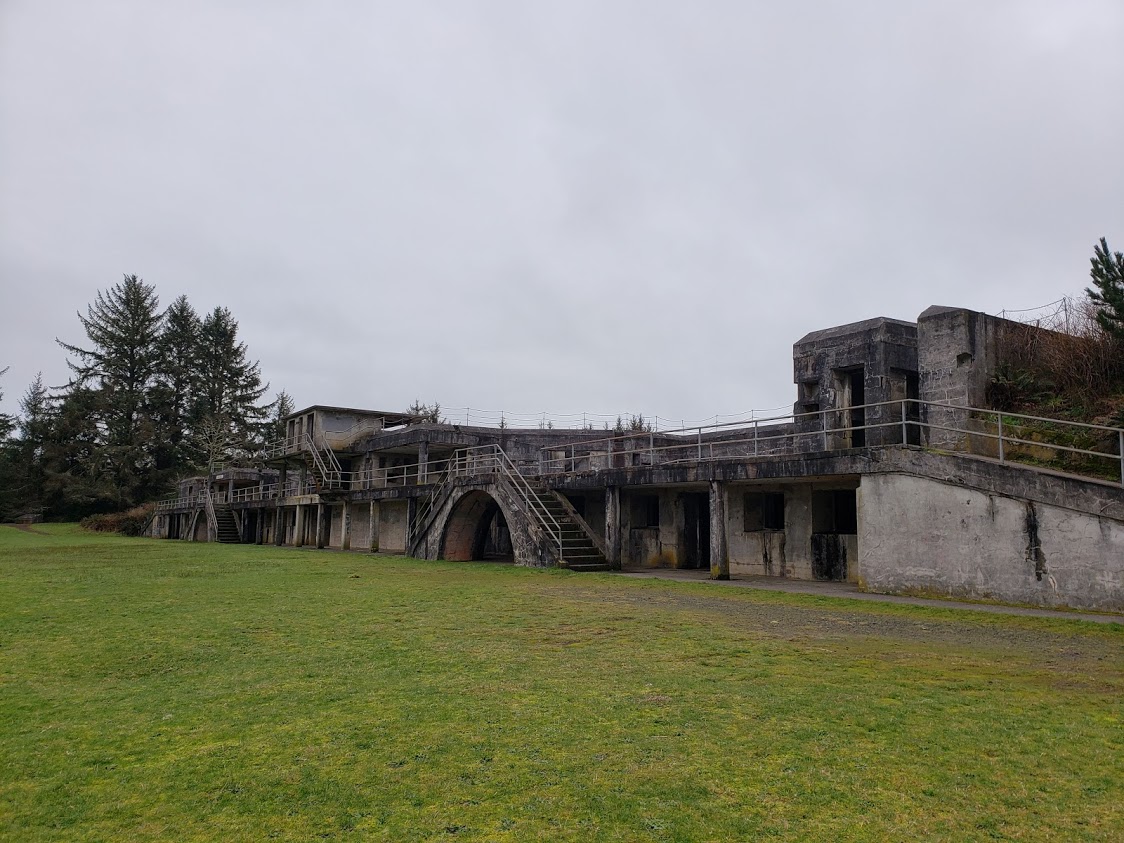 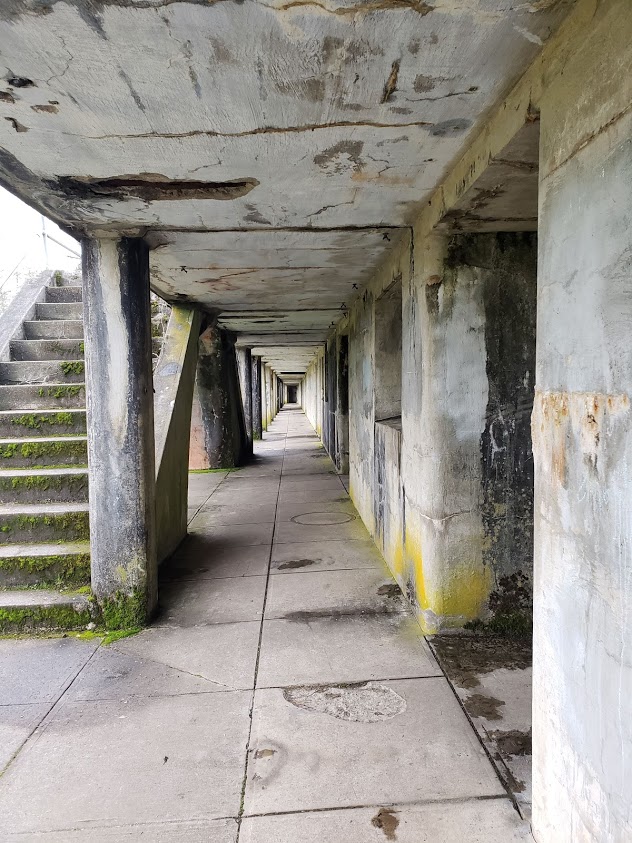 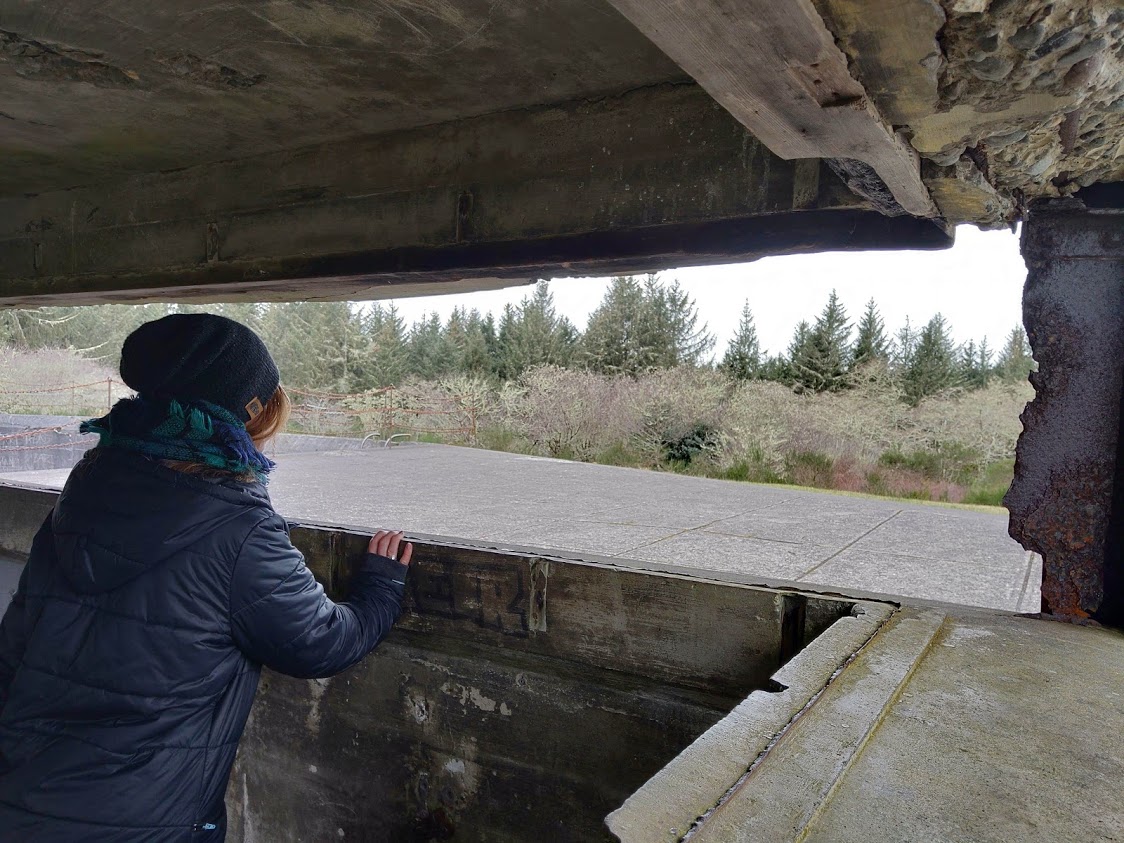 Astoria is filled with history, symbolizing important times in American history. I think that’s what I like most of the town. They not only showcase the history, but they celebrate it. You can find traces of times long ago throughout the town. Pair this with beautiful views and delicious beer, and you have a fun day ahead of you.