Short-Term Living Abroad: What We Did to Get There

Leaving everything can be daunting, especially when you’re not sure how long you’ll be gone. That’s exactly how it felt preparing to live abroad. Funny thing is, the whole idea started as a casual remark after a few dates. The idea sounded exciting, spontaneous, care-free, and lightyears away. But when it became a serious discussion, we realized it wasn’t as care-free as we thought. It ended up taking a LOT of planning; planning that took place months in advance. There were days it felt overwhelming but in the end, it was worth it.

We often get asked how did we do it, how did we make living abroad work. Other times we hear others say they wish they could do it. Often people assume we have lots of money, which is absolutely not true. But living abroad is doable. I believe it’s doable for anyone. There are so many ways in which living abroad, long or short-term, can happen. It just takes a lot of planning, work, and desire.

Tim and I ended up living abroad for five months. Before leaving, we weren’t sure how long we’d be gone or where we’d end up. We began seriously planning six to seven months before we left for Europe. One of the biggest suggestions I have about living abroad is to be flexible. We changed our whole itinerary during the six to seven months before leaving and still ended up making some changes along the way. I can’t stress this enough. Being flexible opened up more doors for us, which meant more experiences. 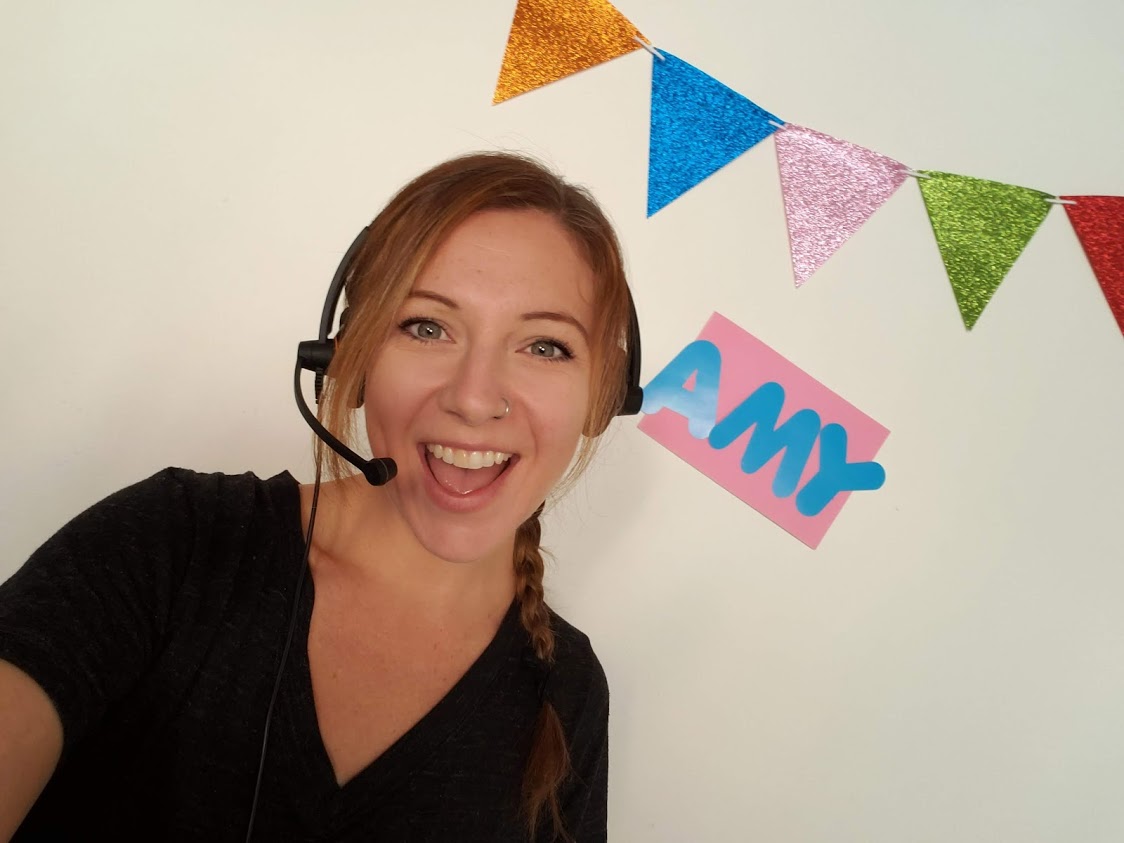 Money: Create a Savings but Continue to Make Money While Traveling

Although many people who travel do so by saving up money, it doesn’t allow you much freedom. If you travel or live abroad this way, you may end up going home much earlier than intended due to running out of money or be on such a tight budget that you don’t experience much of where you are. We didn’t want this for ourselves. Although we built a savings account for living abroad, we viewed that as an emergency fund account. Instead, we set everything up so that we could work while living abroad.

Tim already had this setup for himself. As a remote freelance developer, he can work anywhere. As long as he has internet from time to time and can stay in touch with clients, he’s golden. Me on the other hand, I had to figure something out. I was currently working at a desk job in which I couldn’t do remotely. I was already looking into ways to supplement my paycheck and began considering teaching English as a foreign language as a means to do so. Then it hit me, I could teach from anywhere. So I signed up for my TEFL certification through International TEFL Academy, which I cannot recommend enough. It was such a smooth process. I took my certification course online, with weekly assignments and tests. The academy provided so many resources and made me feel confident in my teaching ability once I completed the 13-week course and practicum.

I was soon hired with two companies and balanced the two while gaining regulars. I taught while still living in San Diego and eventually took my teaching overseas. I needed only a few supplies to make my ‘classroom’, which wasn’t too difficult to bring along. I had a whiteboard, two whiteboard markers, a sign for my name, a bright garland to hang, my laptop, and a headset. See more of my teacher must-haves by clicking here. Everything fit neatly in my backpack. Tefl teaching is part-time work, but between our two incomes, we were more than fine. We were still able to splurge at times and not worry too much about a strict budget. 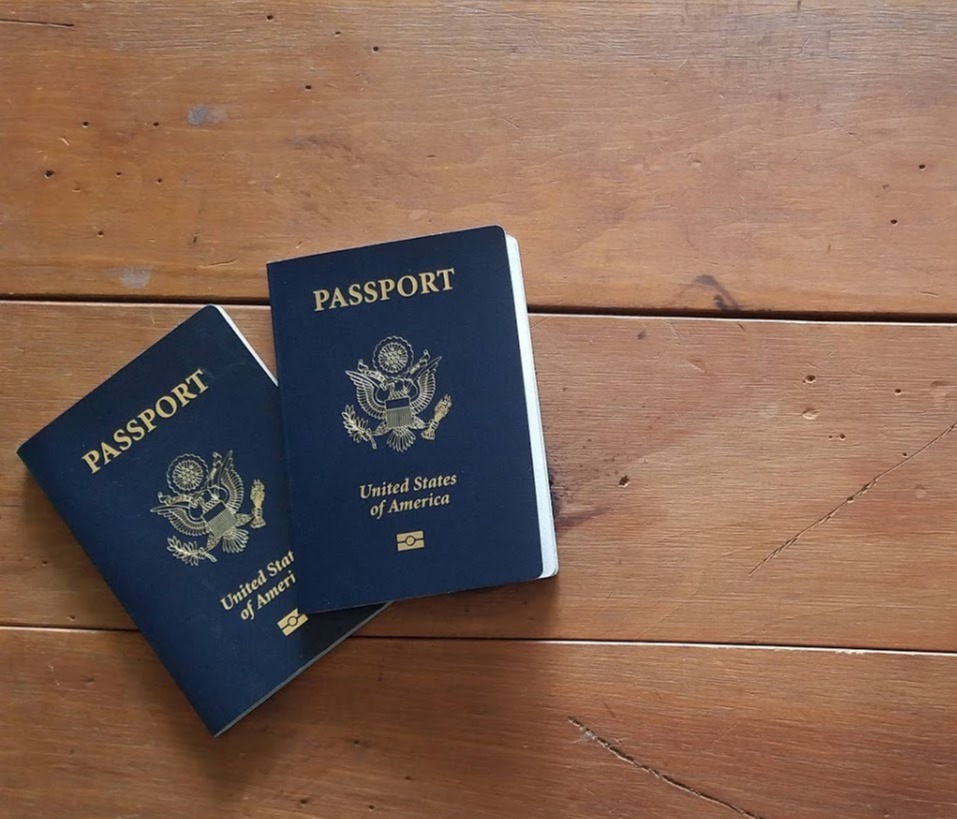 Tim and I already had our passports, but Tim first got his renewed after we first casually mentioned the idea. Getting a passport can take roughly six to eight weeks. Although the process can be expedited with a fee, it’s best to ensure you have your passport well in advance. For more information on getting a United States passport or renewing your current passport, click here. We’re also both approved for the Global Entry program, which I highly recommend. The Global Entry program is expedited entrance into the United States after travel due to a pre-approval process. Pre-approval includes a thorough background check and interview. You can apply for the Global Entry program here.

Visas can be tricky. There are different guidelines depending on the country, length of stay, and residency versus travel. When we first began discussing living abroad, we spent countless hours researching long-term visas in Europe. There can be a lot of bureaucracy to get through depending on the country. You typically need to provide a great deal of paperwork and have a certain amount of money in your bank account prior to being approved. This is all doable, but ultimately we decided we wanted to bounce around Europe before deciding on one country to call ‘home’. This meant that we were allowed 90 days in the Schengen Area of Europe within 180 days without the typical visa paperwork, let alone a visa at all. Most of Europe is among the Schengen Area. There is a full list of countries within the Schengen Area and more on visa allowances here. This has slightly changing though, with a registration of sorts when traveling to Europe as of 2020.

I quickly quit my job once I earned my TEFL certification and began teaching online as an independent contractor. A lot had to lead up to this moment, which you can read more about in a previous post here. This was by far one of the scariest steps for me. Quitting my job made living abroad feel so much more real than before. It’s one thing to talk about doing it and another to actually do it. But then again, sometimes the scariest decisions are the best decisions. 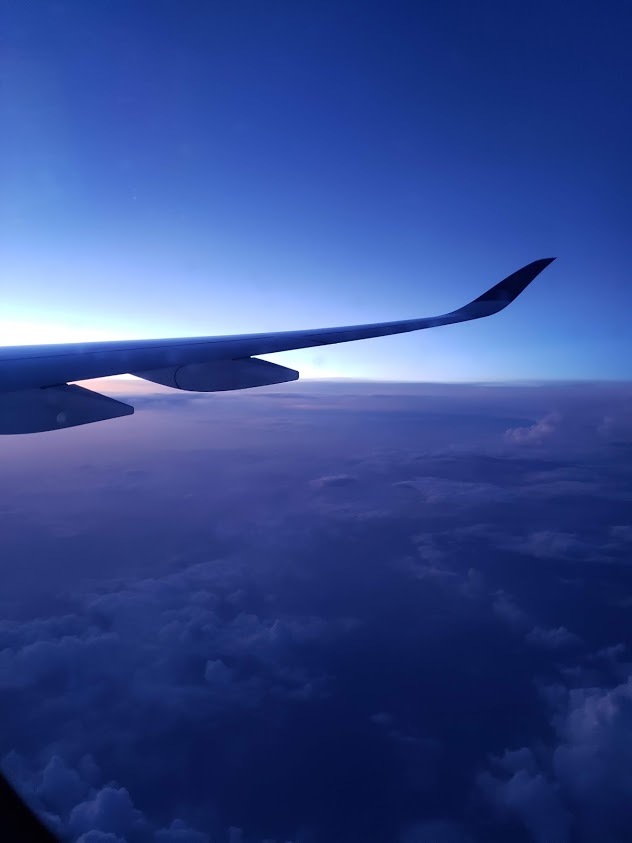 During our planning, we knew we wanted to leave some time in February so that we could celebrate both of our birthdays while living abroad (bucket list item, birthday in Spain!). We didn’t have any required specific dates. We did it this way to ensure that we could find the best deal. Sometimes leaving one day earlier or later can make a difference of hundreds of dollars. We played around with the dates until we found a deal we couldn’t pass on.

In the process, we also learned that round trip tickets are far cheaper than one-way tickets. Originally we planned on a one-way ticket since we didn’t know when we would be flying back. Oddly enough, the cost of a one-way ticket to Europe was 750% more than a round trip ticket! So we picked a random date, unconcerned if we missed that flight. We also bought non-refundable tickets, saving us additional money. We were dead set on making this happen, so once we bought the plane tickets, there was no going back. 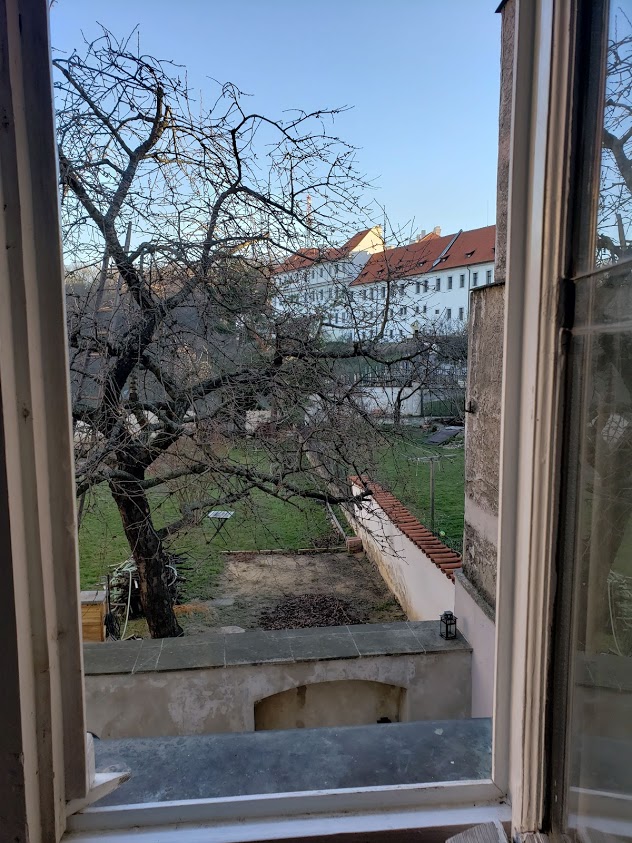 With our plane tickets purchased, it was time to start booking where we would be staying. We pinned down the first city we’d be going to and started looking. We prefer our stays to feel homier, but also immerse ourselves as locals. We don’t stay in hotels, plus they can be absurdly expensive. We typically book through Airbnb but have also booked through VRBO. There are also incredible hostels with private rooms that extremely affordable if you’re not looking for a private kitchen. This time around we opted for Airbnb stays. We recommend booking out two to three months in advance if possible when looking for a long-term rental.

We found that communication with an Airbnb host is essential. For us, we had to ensure the internet speeds were fast and reliable enough for my teaching and Tim’s web development. We always messaged the host asking wifi specifics to make sure we’d be able to continue to work while living there. We also always made sure to stay in a place for at least a week. Most Airbnb hosts give a discount when staying for a week and an even larger discount if you stay for the month. Even if we didn’t see a discount, we would reach out to the host and ask for one. We were able to stay in our desired neighborhoods because of these discounts. 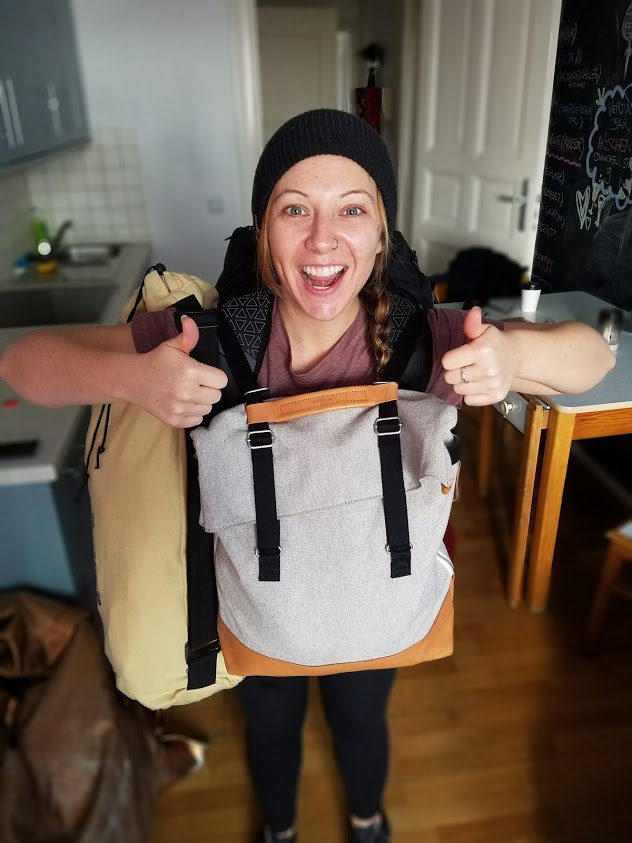 Move Out and Sell Items

We decided it made sense to move out of our apartment and stay with my family for a couple of months before officially leaving. This allowed us to save some extra money, but also spend some extra time with them before leaving. Plus, who wants to spend money on an apartment for months without knowing when or if you’re going to return. We’re so grateful for them not only allowing us to do so but making us feel at home right away.

This lead to us selling and purging a lot of our stuff. We sold large furniture pieces, bags of clothes, and knickknacks. We had garage sales and sold things on Craigslist and Facebook Market. It felt amazing to purge so much stuff. I embarrassingly had clothes in my closet that I hadn’t worn for over 5 years, dresses from my party days, and jeans from high school. I was due to a purge. It felt freeing releasing it all. Since we returned from our short time living abroad, we have purged more and live with less. We simply don’t need it. After going months wearing and using the same things, all of which we carried on our backs, you realize how little you actually need. The stuff doesn’t matter; people, experiences, and love are what matter. 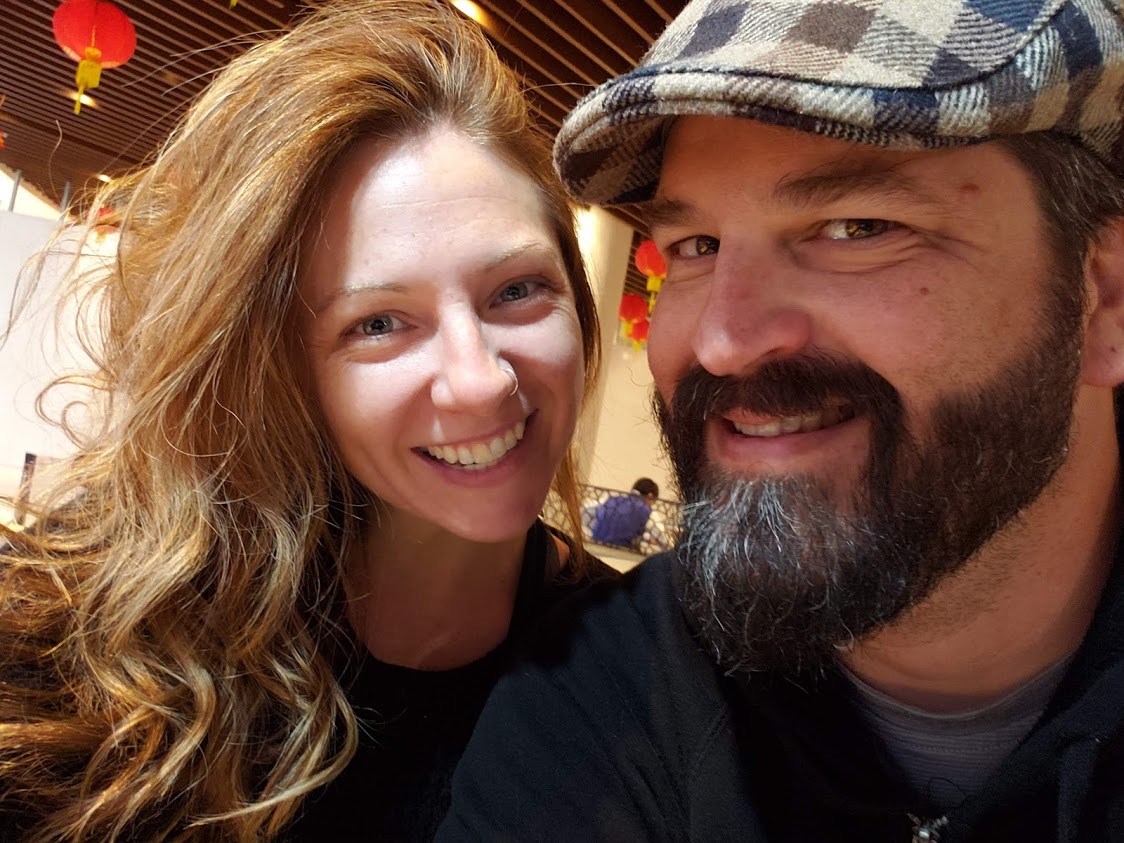 When everything is said and done, when you’ve planned and done endless hours of research, there’s nothing else left to do. You must listen to your gut and trust the work you have done, having faith that you’re making the right decision. And in the end, if living abroad doesn’t work out, learn the lesson and celebrate it! It takes major guts to completely change your life. Living abroad, even if short-term, teaches you a lot about yourself and the world.

And celebrate along the way. Have dinner at your favorite restaurants, get a coffee with a friend at your go-to spot, relax with family with hours of chatting and laughter. These are the little things that you’ll miss when living abroad. So enjoy them, celebrate them, and know an incredible chapter is about to happen.